Below is an unpublished reaction to Maria Sharapova’s loss to Serena Williams at the 2019 U.S. Open. With the recent news of Sharapova’s retirement, I’ve decided to publish my analysis the pair’s “rivalry” below:

Cause of death? Serena Williams.

From the first toss, I, too, was engulfed in the excitement that buzzed within Arthur Ashe Stadium and across TV sets all over the world. The Serena-Maria rivalry is one of the few that has been able to captivate the attention of the avid tennis fan and the uninitiated spectator alike.

However, when Sharapova’s final backhand sailed long, sealing a routine 6-1, 6-1 win for Williams and extending her masterful record against the Russian to 20-2, I felt foolish for briefly believing that we might actually have a match on our hands.

Both of these icons are at the tail ends of their careers. While Serena remains a contender to win Grand Slam trophy No. 24 and cementing herself as the Greatest of All Time, the light at the end of the tunnel grows dim for Sharapova, who is projected to fall out of the Top 100 at the end of the US Open fortnight.

How did Maria fall from her lofty position atop the tennis world? Yes, there have been injuries. And yes, there was the suspension. But, most importantly there has been the inability (or refusal) to adapt her game to the changing tennis landscape.

The birth & death of Maria Sharapova can be traced in her fifteen-year rivalry with the ubiquitous Serena Williams.

A star was born when the rangy, teenaged Maria Sharapova won Wimbledon in 2004, a victory that came at the expense of Serena. Fighting with a dog-toothed ferocity and punctuating shots into the corners with a shriek, Sharapova fought her way to a 6-1, 6-4 dismantling of Wiliams, which, at the time, was the worst Grand Slam loss of her career.

Heading into their 2005 Australian Open semifinal match Sharapova was in the ascendancy.

She backed up her Wimbledon triumph with a win over (an albeit injured) Williams at the 2004 WTA Finals. It appeared the young Russian was destined to claim the No. 1 ranking.

Imbued with confidence, Maria brought her typical A-game to Margaret Court Arena. Firing bombs into the corners of the court, Sharapova claimed the first set 6-2. However, a string of errors at 5-6 in the second set gave Serena her first break of the match and the second set.

In the third, Maria rebounded, serving for the match twice and thrice holding match point to lead their head-to-head 3-1. However, this is when Serena flipped the script.

Realizing that Sharapova’s power was greater than hers, Serena relied on her B-game assets (i.e. her superior footwork, topspin, and variety) in order to tear Sharapova apart.

Ultimately, Serena would triumph 8-6 in the third, on her way to lifting the 2005 Australian Open trophy. The rest is history.

However, many of those losses occurred during a period in which Sharapova was returning from shoulder reconstruction surgery.  A glimmer of hope shone when Sharapova briefly returned to World No. 1 in 2012 after claiming the title at Roland Garros.

I was sitting in the nosebleeds for that final. A young tennis fan at the time, I thought that this would be the day that Sharapova would finally reign supreme.

When she held for 3-0 in the second set, I recall overhearing a woman behind me say, “Serena will pull out of this. I’ve seen her do this too many times before to count her out.”

Upon hearing this, I remember thinking to myself, “How stupid. She’s down 3-0!” However, after Serena reeled off the next twelve games in a row, it was I who was the fool. 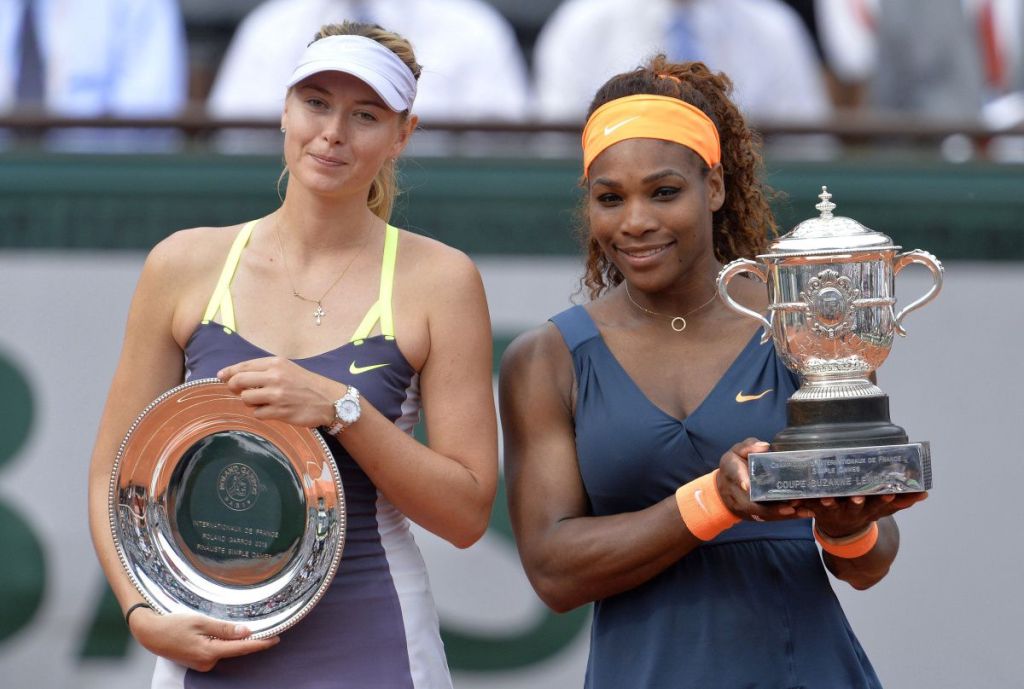 Despite the disappointing loss, many pundits felt that Sharapova was closer than ever to beating her rival once again.

Many pointed to her improved performance on clay, a surface that was undoubtedly Serena’s weakest, as a potential arena for the Russian to emerge victoriously.

Only a couple months later, this prediction was put to the test when Sharapova and Serena faced off in the Roland Garros final.

The contest was close, but the outcome was the no different than before. Maria lost in straight sets, swallowing a 4-6, 4-6 to the younger Williams.

While only a couple months before, Maria appeared closer than ever to emerging victorious over Serena, after Roland Garros that day couldn’t appear further away.

That brings us to today.

Many attribute Serena’s dominance over Sharapova to a fabled & unending quest for revenge upon the Russian for the aforementioned 2004 Wimbledon final. Heck, even Sharapova herself carries this belief, writing in her autobiography:

“But mostly, I think she hated me for hearing her cry [after the match]. Not long after the tournament, I heard that Serena told a friend – who then told me – ‘I will never lose to that little b…. again.’” – Sharapova in Unstoppable, My Life So Far

However, it’s far more complicated than that.

Serena’s mastery over the Russian lies in the versatility to her game. The American’s superior speed & footwork, mastery of topspin, and variety have allowed her to deconstruct the Sharapova game.

Furthermore, Maria’s inflexibility (both literal and figurative) over the years to adapt her game to counter these assets (or develop a B-game in general) is equally to blame for manufacturing the rivalry that never was.

In 2005, Serena flipped the script. However, the tennis world is still (and has been) waiting for Sharapova to respond.