Maria Sharapova made a career by hitting the felt off the ball like no other. However, her uncanny ability to throw shade at her opponents certainly helped cement her status as a bonafide icon.

As the five-time Grand Slam champion and former World No. 1 hangs up her racquets, let’s count down the Russian’s most memorable verbal clashes.

We will not be seeing any more of Maria Sharapova in 2020. However, both her & her ex-boyfriend Grigor Dimitrov have already delivered an exchange that will undoubtedly rank amongst 2020s more memorable off-court moments.

In 2013, news of Sharapova and baby-faced Dimitrov’s budding romance took the tennis world by storm. However, by Wimbledon 2015, the couple reportedly called it quits.

In her biography “Unstoppable: My Life So Far”, Sharapova writes:

I was supposed to be focused, getting prepared for my own matches, my own triumphs and defeats, on the largest stage of my career. I had been watching his match that day only because I’d lost early at those championships. So his good memory was my bad memory. What meant everything to him happened only because I had lost.

Fast-forward five years, Sharapova was approached by Dimitrov while taking a spin in the commentary booth at the Kooyong Classic (an Australian Open tune-up exhibition). As the Bulgarian ducked inside the booth, the Russian quickly questioned Dimitrov’s choice in attire:

“What’s this yellow thing going on?”

“Not really,” she chided.

I think it goes without saying that the term “just friends” might not be the most appropriate term to describe the state of this duo’s current relationship.

Masha leads Aga in their H2H 13-2. Despite this lopsided record, the Pole has never shrunk back from criticizing her Russian rival — especially for her signature shriek.

In response to Aga’s comments, characterizing Maria’s grunt as “really annoying”, Maria poses a simple question: “Isn’t she back in Poland already?”

Sharapova initially rose to prominence with her underdog win over Williams in the 2004 Wimbledon final. However, since that signature win, Serena has owned the rivalry. While their on-court head-to-head should be considered anything but a rivalry, the pair’s intensity off-court certainly can.

Heading into Wimbledon 2013, Sharapova and Serena had re-ascended to the summit of the women’s game. They had just sparred in the 2013 Roland Garros final and looked fated to face-off at Wimbledon yet again–nearly ten years after Sharapova’s iconic win.

Before the first ball was struck, controversy sparked when comments from a Rolling Stone profile of the younger Williams seemed to target the Russian:

There are people who live, breathe and dress tennis. I mean, seriously, give it a rest.” Serena exits the car and the conversation moves on to a top-five player who is now in love. “She begins every interview with ‘I’m so happy. I’m so lucky’ – it’s so boring,” says Serena in a loud voice. “She’s still not going to be invited to the cool parties. And, hey, if she wants to be with the guy with a black heart, go for it.” (An educated guess is she’s talking about Sharapova, who is now dating Grigor Dimitrov, one of Serena’s rumored exes.)

During her pre-tournament media day interview, Sharapova didn’t hold back:

Obviously I have a tremendous amount of respect for Serena and what she’s achieved on the court. You can never take anything away from that.

As for myself, or whether it was about somebody else, nothing personal, you know– if she wants to talk about something personal, maybe she should talk about her relationship and her boyfriend that was married and is getting a divorce and has kids. Talk about other things, but [don’t] draw attention to other things. She has so much in her life, many positives, and I think that’s what it should be about.”

Unfortunately, we never got to see the pair translate these tensions into a grudge match (both fell before the quarter-finals that year). However, given Sharapova’s measly 2-20 record versus the American, it’s probably better for the Russian that that encounter never came to pass.

As aforementioned, Sharapova and Radwanska’s relationship can be described as testy-at-best. However, the Russian’s pulverization of the defensive-minded player can be seen as a metonymic example of Sharapova’s ability to pummel the rest of the tour into submission throughout her career (save Serena, of course).

At the 2012 WTA Finals, the pair played a grueling classic, with Sharapova emerging victorious by the score of 5-7, 7-5, 7-5. During the third set, after a point that required the former World No. 1 to hit not one, not two, but three overheads, she jeered at her rival: “Run! Run!”.

You can “run, run” all you want, but in the end, even fast feet aren’t enough to quell the mighty power of Sharapova. 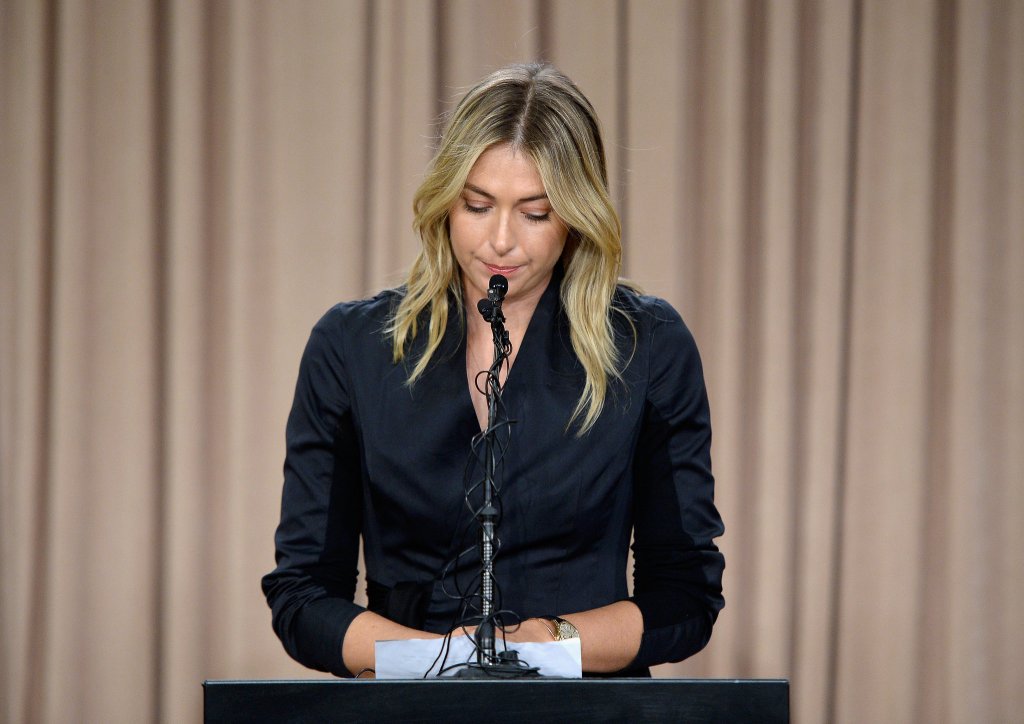 In 2016, when Sharapova sent a mysterious invitation to tennis journalists to attend an unexpected press conference in downtown L.A., many speculated that the Russian superstar was set to announce her immediate retirement from the sport.

In the end, Sharapova shocked the world by disclosing her failed drugs test.

Whereas many other players who have failed drugs tests in the past (Marin Cilic, Richard Gasquet, Sara Errani, and Barbora Strycova to name a few) have retreated from the public eye, Sharapova instead chose to face the public directly.

While wrapping up proceedings, Sharapova affirmed her intentions: to fight the charges and return to the sport. In fact, she addressed the rumors about her retirement head-on:

I know many of you thought I would be retiring today and announcing my retirement. But, if I was ever going to announce my retirement, it probably would not be in a Downtown Los Angeles hotel with this fairly ugly carpet.

Leave it to the always design-savvy Sharapova knock the hotel carpet whilst in the midst of attempting to save her reputation.

When Sharapova was granted a wild card into the 2017 U.S. Open, her first Grand Slam match following her 2016 doping violation. many players felt the preferential treatment wasn’t deserved.

None were more displeased than two-time finalist, “sweet” Caroline Wozniacki. On a day in which the Dane bottomed out in the second round (to a player ranked outside the Top 100–no less), Wozniacki arrived at her press conference with guns blazing. Upset about having to play on Court 17, Woz slammed tournament organizers for placing “cheater” Sharapova on a stadium court for the second consecutive match.

When asked about Wozniacki’s comments in her presser, Sharapova retorted:

As you know, I don’t make the schedule. If they wanted to put me on a parking lot in Queens, I’d be more than happy to play there.

I think we all know that if Sharapova were to play in a parking lot in Queens, that would be the hottest ticket in NYC that night– not a stadium ticket featuring Wozniacki.

In 2014, Ana Ivanovic re-entered the women’s Top 10 and the Sharapova-Ivanovic rivalry was renewed. Meeting in the Cinncinatti semifinals, Ivanovic led 6-2, 5-2 before completely falling apart.

In the blink of an eye, Sharapova stole the second set and led by a break in the final. In the middle of the 4-3 game, Ivanovic took an unusual medical timeout, asking the physio to check on an irregular heartbeat.

When play resumed and Sharapova double-faulted the break away, she tapped her wrist and instructed the umpire:

Needless to say. the comment was heard around the world. Unfortunately, Ivanovic would have the last laugh, winning the match 7-5 in the third.

When news broke about Sharapova’s failed drugs test, none were harsher on the Russian than Eugenie Bouchard.

Eugenie was quick to call Maria a “cheater” and go so far as to say “a cheater should never be allowed to play the sport ever again”.

When Maria returned to tour in 2017, the young Canadian elaborated, “She’s not someone I can say I look up to anymore.”

However, tensions between the two were fraught years before Maria’s doping violation came to light. The similarities between the two players are uncanny. From their blonde hair to their supermodel looks to their flat, aggressive baseline games. In the words of Chris Evert, Bouchard is Sharapova’s “mini-me”.

In 2014, the young Canadian looked ready to surpass her older counterpart, leading Sharapova in their Roland Garros semifinal. However, Maria ultimately gritted out the match, winning the second set 7-5 before running away in the third.

By 2015, Sharapova had figured the young Canadian out, asserting mastery over Bouchard in a straight-sets drubbing in the Australian Open quarterfinals.

Somehow, the draw gods heard her pleas and just a week after her dismissive comments rocked the tennis world, the two were projected to face-off in the Madrid Open second round. In response to Genie’s comments, Sharapova answered: “I’m above that.”

In the end, Bouchard emerged victorious over Sharapova, a jaw-dropping victory given that the Canadian had been in a slump since her breakthrough 2014.

However, Sharapova would have the last laugh. Without uttering so much as a word, Sharapova mocked the Canadian’s affluent upbringing with a simple Twitter-like heard around the world (see below). 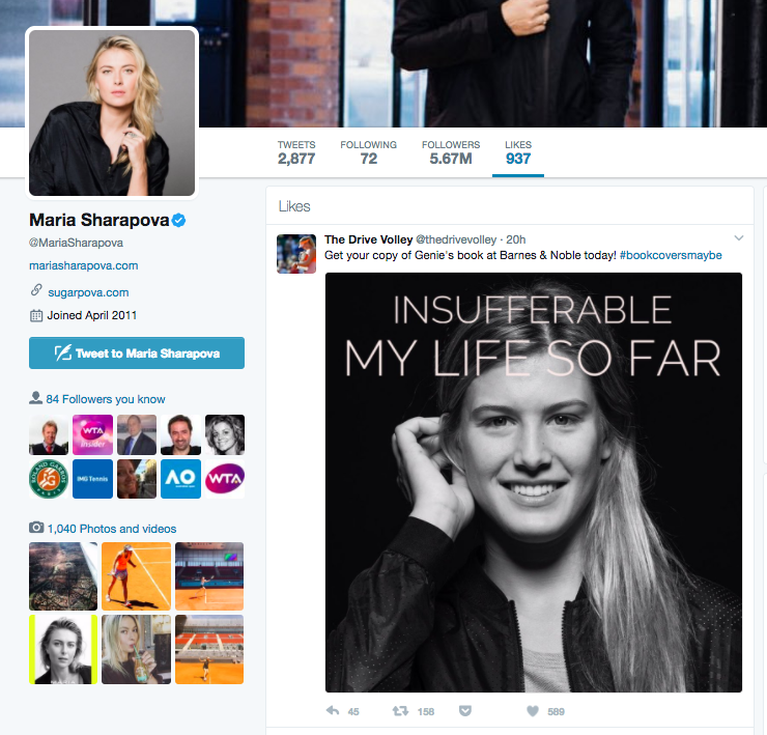 Women face a host of unfair social expectations, and none carry the weight of those expectations more than the female athlete.

In a world that overemphasizes the worth of a woman’s physical appearance and undervalues characteristics such as her strength and intellect, Maria Sharapova shatters these expectations.

Exhuming both strength & beauty, Sharapova teamed up with Nike ahead of the 2006 US Open in order to silence the misogyny of some critics.

The ad follows a young Sharapova heading to her US Open match from the Waldorf-Astoria Hotel. The people she passes along the way each sing a line from the iconic West Side Story tune “I Feel Pretty”.

However, as the song climaxes, the match begins and Sharapova smacks down a return ace punctuated by her iconic grunt. Silence.

1. Sharapova vs. The French Crowd

In 2008, Sharapova was at the peak of her career. She recently won the Australian Open (in straight-sets) and rose to World No. 1. The only hole in the 21-year-old’s resume was a French Open title.

With an open draw, 2008 looked to be the year that the “cow on ice” would finally reign supreme on the terre-battue. However, in the fourth round, Maria found herself in a battle on Court Suzanne Lenglen with compatriot Dinara Safina and the French Crowd.

While Maria was fending off break point after break point, the unruly French crowd was shouting during points, applauding her double faults, and mocking her trademark grunt.

After saving another match point by firing a missle of a forehand onto the court’s tramline, Sharapova let out a shriek:

Allez up your fucking ass!