It took me a long time to find the energy to write about what I witnessed from Row X (yes, there’s a Row X) of Arthur Ashe Stadium during the US Open Women’s Singles Final on Saturday September 8th.

By posting this reaction now, I’m probably beating a dead horse. However, at the same time, this is probably one of the most important topics to address in the sport of tennis this season—and mostly likely the next few to come.

During the fallout of “the incident” many things were said. And many fingers were pointed.

At the US Open.

And at the tennis community as a whole.

However, I want to be clear: while what transpired on Saturday was unfortunate, it is by no means reflects upon the state of tennis or Serena for the matter. What it reflects upon is the state of society as a whole—it just so happened to transpire on a tennis court.

If you need a catch-up on “the incident” read after the break. If you don’t, scroll below. 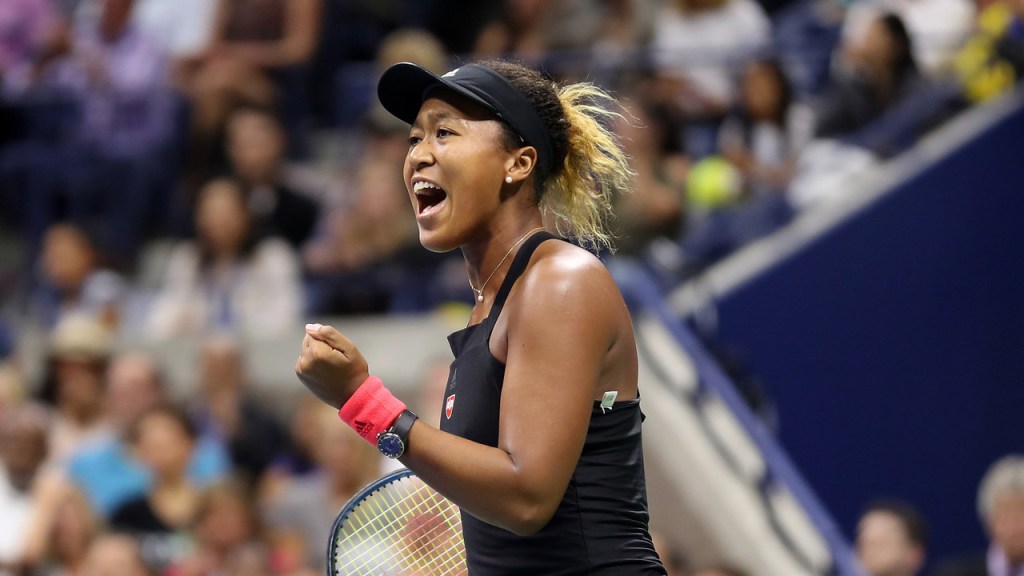 Serena Williams was playing Naomi Osaka, a 20-year-old half-Japanese, half-Haitian upstart in the US Open Final. While Serena was gunning for Grand Slam 24 (her first since her pregnancy), Osaka was looking to achieve a lifelong dream by lifting her first Championship trophy–and triumphing over her childhood idol no less.

Just eight weeks prior, Serena seemed destined for Greatness with her run to the Wimbledon final—only to be stopped in her tracks by an impenetrable Angelique Kerber. Heading into Saturday’s final, the Serena Express seemed to have shaken off the disappointment and primed to go all the way and tie Margaret Court’s record—firmly establishing herself as the undisputed best tennis player of all time and arguably the greatest athlete of all time.

The stakes were set, setting the stage for a tense match.

From the outset, the nerves were apparent. The fact that Osaka was playing some of the best and most carefree tennis since she pummeled her way to the Indian Wells title in March didn’t help much either. While Serena was pumped, she also appeared flat-footed and listless. Osaka had all the answers. She bulldozed through the first set in just over a half an hour. Serena committed 13 unforced errors compared to Osaka’s 4. She served at a measly 38% in contrast to Osaka who made astounding 73% of her first deliveries.

The second set is when things got dicey.

While trailing 40-15 in Osaka’s opening service game, Serena was issued a coaching violation by chair umpire, Carlos Ramos, after her coach, Patrick Mouratoglou, gestured for her to move forward from the stands.

Coaching or not ?#usopen pic.twitter.com/OATS0LE2Y2

Serena, who was already on edge given the fact that she was losing and certainly not playing her best and who has a reputation for never calling her coach, even during tour-level events where on-court coaching is permitted once per set, was set off. She briefly halted play in order to offer a few choice words to Carlos Ramos (“I am not a cheater”). 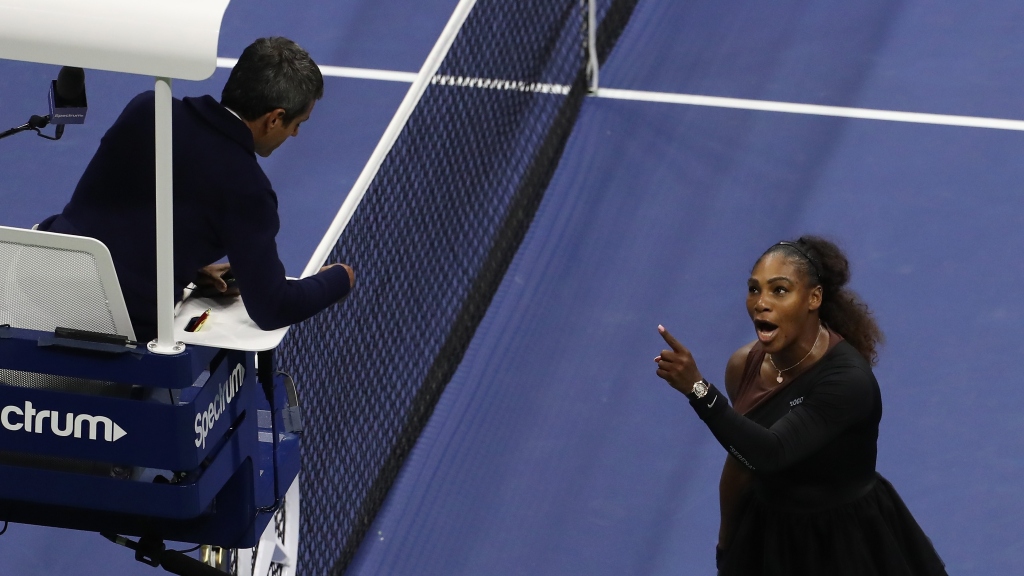 As Serena should know, the rules clearly state that players may not attempt to communicate with their coach during a Grand Slam-level match—or vice versa. Every player on tour knows this. In this case, the penalty was issued due to Mouratoglou’s actions—not Serena’s. However, given the tense circumstances (being behind and not playing great), she took it personally.

After saving break point in her following service game and finally breaking Osaka’s serve (in a dramatic game that went several deuces) to go up 3-1, Serena looked on the cusp of one of her characteristic Houdini-like escapes. However, after going up 30-15 in her subsequent service game, with a chance to hold a commanding 4-1 lead, Serena threw in not one, but two, double faults, ultimately losing the game on an unforced error.

Understandably, Serena smashed her racquet on the ground—an action that, as every player knows, leads to an automatic code violation. This, being her second code violation of the afternoon, automatically generates a point penalty.

Somehow, in the hubbub of the changeover, Serena was unaware of this until the score was announced as Osaka stepped to the baseline when play resumed.

If the first violation conjured a spark in Serena, this violation ignited a full-blown a flame. Serena unloaded on a silent Ramos, reiterating that she “[has] never cheated in [her] life” and that Carlos owed her “an apology”. Again, in the heat of the moment, Serena failed to understand that the issue revolved around coaching—not cheating. She was putting words in the mouth of Ramos, which were simply never there.

When the match resumed, a red-hot Osaka was unfazed and not only leveled the score to 3-3, but immediately broke to lead 4-3—on the cusp of victory and on the cusp of realizing her dream.

To put it nicely, during the changeover, Serena let her emotions get the best of her. You can view the two-minute, one-way exchange for yourself:

Quite honestly, it echoed her dispute with chair umpire Eva Asderaki (“You’re unattractive on the inside. If you’re walking down a hallway and you see me, look away.”) Needless to say, it was difficult to watch.

When play resumed, Serena was issued her third code violation. This time: verbal abuse. The penalty? The forfeit of a game–now making the score 5-3 in Osaka’s favor.

While Serena insisted that she was given the code violation for merely calling the umpire a thief, that wasn’t the case. She received the violation for calling into question the non-biased integrity of the umpire, which directly violates ITF rules.

Calling for the tournament director to come onto court, Serena pleaded her case, insisting, “Many men have said far worse things on this court”.

What Serena’s said is true. In the amateur and early-pro eras of tennis, men like Jimmy Connors, Ilie Nasatse (nicknamed “Nasty” for short), and John McEnroe were famous for their tirades. This history of unruly behavior, particularly from men, is exactly why the code violation system is in place—and they have suffered for it as well.

At the 1990 Australian Open, John McEnroe was disqualified for menacing a line judge. Just last year, at the 2017 US Open, Fabio Fognini was suspended for saying things that can never be repeated in print to an umpire.

To compare two different eras of tennis history is comparing apples and oranges—and the statistics support it. Research from the NY Times shows that men have 62 code violations for verbal abuse since 1998 compared to 16 for women.

In the end, the tournament director informed Serena that the decision could not be reversed, and soon after it was game, set and match. Oska had won.

Needless to say, the trophy ceremony was awkward (at best). There was Serena breaking down on stage trying to convince herself “we’ll get past this”. There was Katrina Adams saying “this isn’t the result we wanted”. And lastly, there were Naomi’s tears. 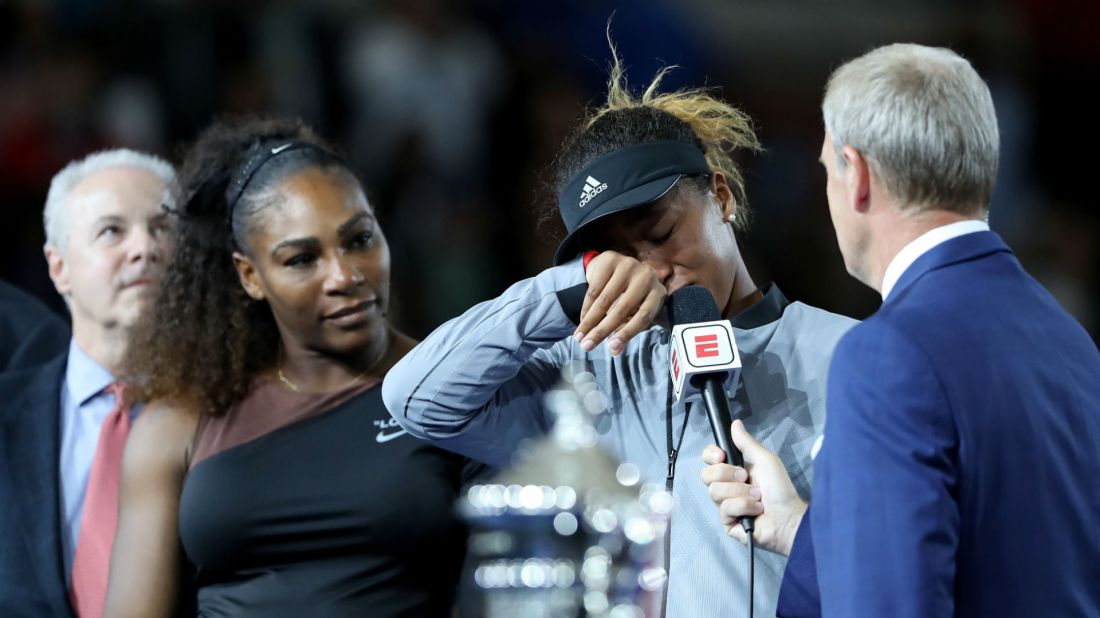 In the vacuum of the match, the violations that Serena was given were all warranted. Moratoglou admitted to attempting to coach his pupil. Serena did smash her racquet. And Serena did verbally abuse Albert Ramos while questioning his integrity as an official.

However, I sympathize with Serena because we don’t all have the privilege of living in a vacuum. As Serena said in her post-match presser, “I thought back to 2004…”, when the events on court were transpiring. While the sexism involved in the incident is questionable—it’s the effects of sexism that she’s faced in past instances, both on court and off, that surfaced during the match.

It’s an anxiety that disables one from being able to accurately recognize bias in the heat of the moment is the effect of racism, sexism, and homophobia. It’s the kind of insecurity that questions the intentions of those around you during every waking moment of the day. Do they see you for you–or do they see what’s on the outside first? It’s a feeling that some have the privilege of living without. It’s the kind of insecurity that Serena went through before our very eyes on that Saturday afternoon.

When Serena and Naomi cried while on the podium, I cried too. The situation was unfair for everyone involved—Serena, Carlos Ramos, Naomi, the fans, and the sport of tennis at large.

For a sport that has been the harbinger of so much social progress (being the only professional sport where women earn equal prize money on the highest stage, the only Olympic sport where men and women compete directly against each other, and one of the only sports that’s truly international and diverse), the sport looks backwards during moments like these. For the casual viewer, who might falsely characterize tennis as “elitist”, the events that transpired only legitimized this belief. Why would any kid feel comfortable with picking up a racquet if our sport is so consistently characterized with such exclusion?

There’s one thing that everyone inside or watching the event on Louis Armstrong have in common—Serena, Naomi, Carlos Ramos, the USTA, and the fans—that being a love of tennis.

As I said before, when Serena and Naomi cried while on the podium, I cried too. And that’s why I’m won’t get past this for some time to come.