Before we’ve had time to digest Simona Halep’s long awaited moment of deliverance, process Sloane Stephens’ hater-silencing run to the Roland Garros Final (a final outside North America, she’d be the first to remind you), or, more importantly, rid ourselves of the champagne hangover, Wimbledon is upon us and you know what that means: Pimms and strawberries & cream. Oh right, and the tennis. 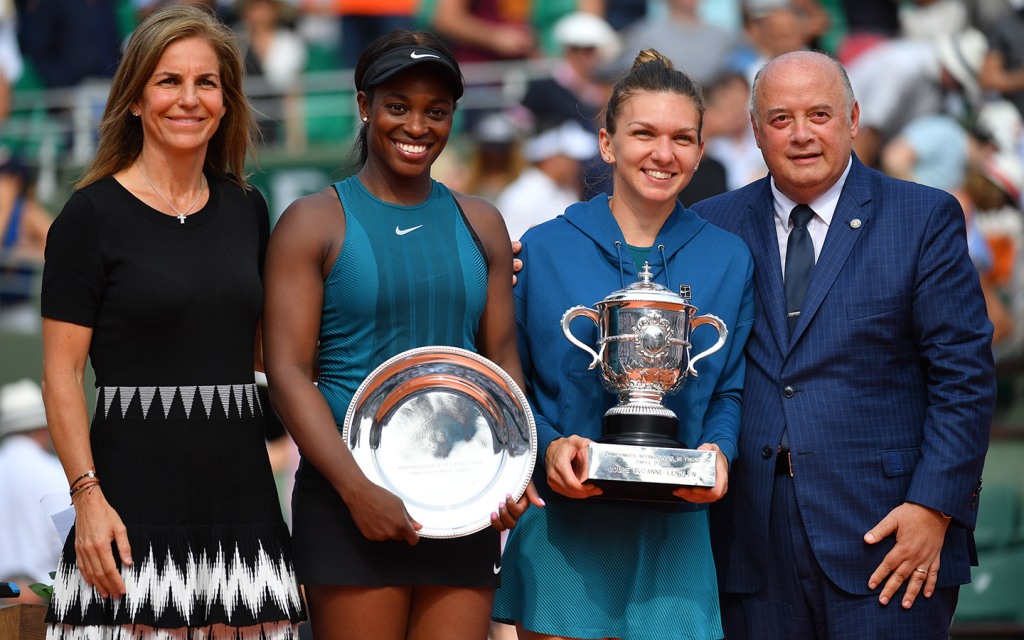 Who is primed to claim the Venus Rosewater Dish? Will newly crowned, Roland Garros Champion and World No. 1 Simona runaway from the pack at the pinnacle of the sport? Will one of the more consistent players on the tour, like evergreen Elina Svitolina or resurgent Petra Kvitova lift the trophy. Or, will one of the tour’s veteran champions Victoria Azarenka, Maria Sharapova, Venus Williams, or, last but certainly not least, Serena Williams, put them all back in their rightful places by claiming the tour’s most prestigious title. Let take a peek at the tournament the Draw Gods have given us.

Winning her first grand slam and legitimizing her No. 1 status lifted a weight off of Simona Halep’s shoulders. Quite literally, in fact–you could see it in her posture during her press conference following the final. Could there be a player playing more freely than Simona Halep this tournament? I think not.

Even if there are any nerves, she’s been handed a mightily manageable draw, playing Japanese Kurumi Nara in the first round and projected to play No. 30 seed, Anastasia Pavlyuchenkova, who she has a perfect 7-0 record against in the third. The only tricky opponent she might face is Su-Wei Hsieh, whose crafty game might be able to bring an opponent out of rhythm on low-bouncing grass, but quite frankly, her serve is way too much of a cupcake to pose any sort of danger to a strong returner like Halep.

While Simona Halep may be the freest swinging player this tournament, the player with the is Jo Konta, who sits in the other half the this section. After reaching last year’s WImbledon semi-finals (and defeating Halep in one of the most thrilling matches of the year), Jo has slipped to No. 22 in the rankings. Luckily for her, she’s discovered a sliver of her form since the tour converted from clay to grass. However, situated in a crowded section that includes big-serving Vikhlyantseva, dramatist Alize Cornet, Energizer-bunny Dominika Cibulkova, giant-killer Danielle Collins, and the crafty Elise Mertens, a run like last year’s appears unlikely.

The second quarter in this section is one of the most loaded quarters in the draw. Ostapenko, Sharapova, and Kvitova are all here–only one can reach the quarters. Ostapenko plays British wildcard Katy Dunne in the first round and must play either Kirsten Flipkens or Heather Watson (who are no strangers to grass) in the next. Should she survive that task, her reward might be a date with 2004 champion, Maria Sharapova.

However, Sharapova reaching that far doesn’t seem to be a lock to me. While she should breeze by Russian compatriot, Vitalia Diatchenko in the first round, she must play either young-upstart Sofia Kenin (who reached the Mallorca semis last week and took an inspired set off of Sharapova at last year’s US Open) or surging Maria Sakkari (who beat Sharapova at the Boodles Exhibition held in Hurlingham a few days ago). Should she reach the fourth round unscathed, she will undoubtedly be tired.

Conversely, Kvitova plays Aliaksandra Sasnovich in the first round, who had an inspired start to the year but has since cooled down. In the next round, she must play a resurgent Pauline Parmentier or one of the tour’s only remaining serve-and-volleyers, Taylor Townsend (that should be an interesting match to watch). While Gavrilova, Diyas, Peng, and Stosur are all quality players, with wildly different games, I see a healthy Petra navigating her way to the fourth round with ease, where she should be prepared to handle any adversary she should face, even if it’s Ostapenko or Sharapova.

However, in the quarters, Petra’s admitted limitation of “want[ing] it too much” combined with her 1-3 record against a free-hitting Halep will get the best of her.

The first section of the second quarter of the draw is 2017 Champion Muguruza’s for the taking. The question, is whether she’s ready to live up the pressure of defending a Grand Slam title. Last year at the French, after her dramatic encounter with KiKi Mladenovic (“who speaks like 25 languages…”) she admitted that the pressure weighed down on her. However, this year, I don’t think that there are any opponents who will be able to exploit those nerves in the tournament’s first week. She opens against big-serving home-hope, Naomi Broady and the closest seed to her is Anett Kontaveit. While Anett had a brilliant run on clay this season, she’s already 0-2 on grass. 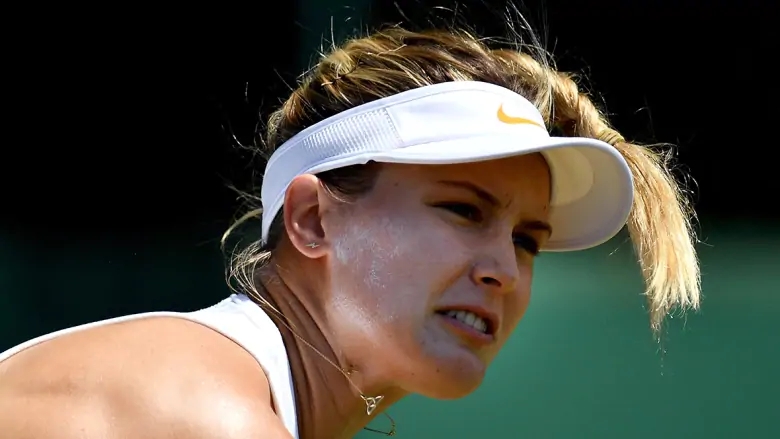 The second half of this section is quite interesting as it is littered with many young-upstarts who are still finding their way on grass: Ash Barty, Daria Kasatkina, Yulia Putintseva, British wildcard Gabriella Taylor, and, most notably, Eugenie Bouchard, 2014 Wimbledon Finalist turned 2018 qualifier. If there’s ever a draw for her to “turn on” again, it’s this one. The question is whether she’ll be able to take it.

The lower half of this quarter of the draw is equally as intriguing. The 2016 and 2010 finalists, Angelique Kerber and Vera Zvonareva are to square off in the top half of the draw, while young-guns Caroline Garcia and Belinda Bencic are to face each other in the bottom.

If Kerber is to win her match (which she probably will if she isn’t too tired from her epic semi-final that she lost against Wozniacki in Eastbourne at the time of writing) she’ll have to play against either young upstart, Ana Konjuh, whose best results have come on grass, or rookie Claire Liu, who was the 2017 Wimbledon Girls Singles Champion. In the third round she is projected to face Naomi Osaka and her boom-boom serve. I think the winner of that match-up will reach the quarter-finals, as the only other player worthy of note in the lower half of the section is Alison Riske (who has been on a 15-4 tear since Rome and whose unconventional game reaps its rewards on grass).

Should Muguruza play Kerber in the quarters, it would be a rematch of last year’s fourth round grudge-match (which propelled Muguruza to the title). Muguruza’s coach, Sam Sumyk, has rationalized their often tense on-court coaching exchanges by explaining that the desire to win comes from the athlete “torturing” herself. However, he also admits that this process can’t be healthy for anyone in the long-term. While Muguruza holds a dominating 5-3 H2H over Kerber sweeping their past five matches (two of them at the All England Club), I think that Angie’s grit will prevail of Mugu’s tortured nerves. The third quarter of the draw is riddled with players with question marks over their form, with No. 7 seed Karolina Pliskova situated in the top section and the No. 4 seed and recent Roland Garros runner-up, Sloane Stephens placed at the bottom.

Almost exactly a year ago, at the conclusion of Wimbledon, Karolina Pliskova reached the pinnacle of women’s tennis by claiming the No. 1 ranking. However, this was underscored by her dismal performance at the All England Club, only reaching the second round. While Pliskova is equipped with a booming serve, powerful groundstrokes, and unexpectedly good footspeed, she’s underperformed this season. She should be winning titles week in and week out, but so far this season, she’s only claimed on title, on clay at Stuttgart. In fact, she’s only 2-2 on grass, having failed to defend her title in Eastbourne and falling in the first round of Birmingham.

She’s never been past the second round of Wimbledon (quite shockingly) and her second round opponent is former World No. 1 and two-time Australian Open champion Victoria Azarenka who’s still on the comeback trail following her custody dispute. The question is whether we’ll see the Azarenka who blitzed her way to the Miami Open semis (thrashing Pliskova along the way) or the Azarenka who bottomed out in the first-round of the French Open five weeks ago. We’ll have to wait and see.

Also situated in this quarter are No 9 seed Venus Williams, No. 20 seed KiKi Bertens, and No. 29 seed Mihaela Buzarnescu. While being a five-time Wimbledon Champion means that she must always be considered a contender, her 10-7 record on the year begs otherwise. I see her facing a steep challenge from Karolina’s twin sister, Kristyna in the second round.

Conversely, Mihaela Buzarnescu has posted an excellent record on grass this season, running 7-3 in singles (and 6-1 in doubles at the time of writing). While the top seeds in this section hold question marks over their heads, Buzarnescu has provided every reason to believe she can fight her way to the quarters.

In the bottom half of the section, Sloane Stephens makes her return following her run to the Roland Garros final. While Sloane plays with the kind of relaxed aura that allows her to play freely in finals (posting a 6-1 record), it also leads to many first round loses. If Sloane is able to pick herself up off her feet after the disappointing lost at Roland Garros, there’s no other reason to think that she can’t go far. The only other contenders in her section are the tricky and erratic former quarter-finalist, Barbora Strycova and big-serving, but underperforming German, Julia Goerges. 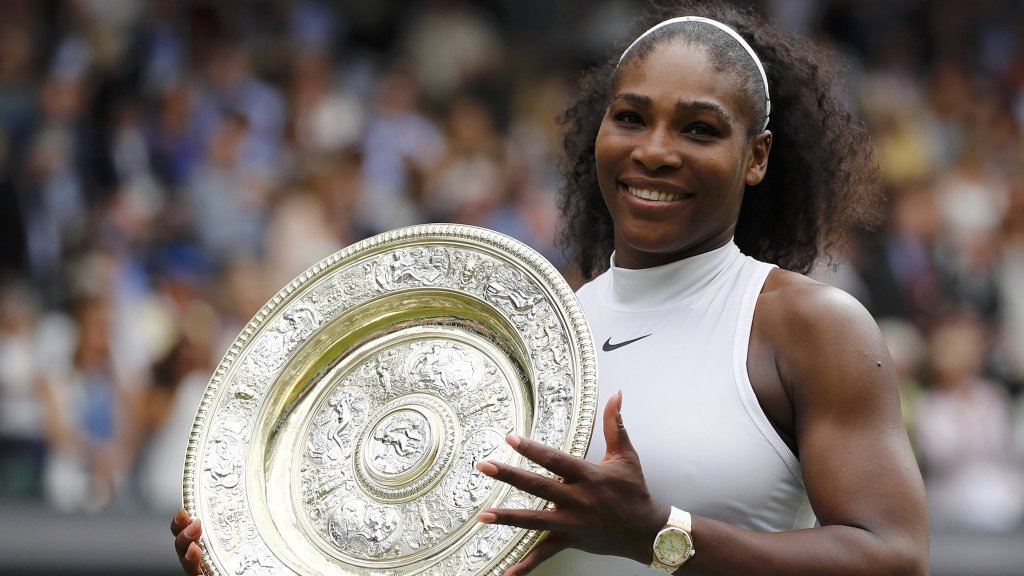 Last, but not least, we arrive at the most anticipated section of the draw, the one containing none other No. 2 seed Caroline Wozniacki and No. 5 seed Elina Svitolina. Oh, right, and No. 25 seed Serena Williams.

Serena sits in the top section, where she is projected to face Elina Svitolina in the third round. While both players face tricky openers with Serena opening against the Dutch, former Junior No. 1, Aranxta Rus and Svitolina taking on Nottingham champion, Tatiana Maria, I expect the third round, marquee billing to come to pass.

The match is difficult to predict. While she is the GOAT and a seven-time Wimbledon champion, Serena hasn’t played many matches during her comeback and none on grass. Conversely, Svitolina has won their last encounter, a 6-4, 6-3 win at the Olympics in Rio, and has matured into a more complete player since. While Serena claimed the scalps of Ash Barty and Julia Goerges at Roland Garros, Svitolina is the more complete player that consistently hits a heavy ball (one of tour’s best backhands) and can run for days. I believe this is exactly the kind of win she needs to get over her grand slam hoodoo. 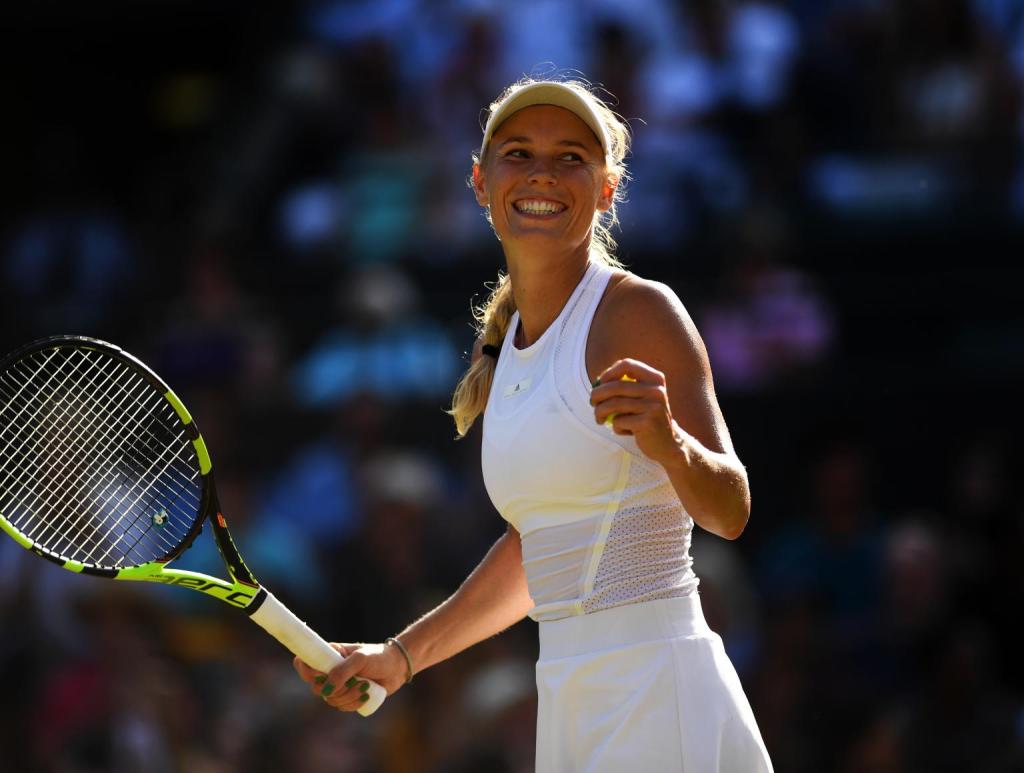 The bottom half of the section sits No. 2 seed Caroline Wozniacki, No. 32 seed and 2011 Wimbledon Finalist Agnieszka Radwanska, No. 16 seed and two-time Wimbledon Quarterfinalist CoCo Vandeweghe, and No. 21 seed and Mallorca finalist Anastasija Sevastova. While CoCo and Aga have had success on grass, they haven’t been playing too well this year (mostly due to injuries). Conversely, Wozniacki’s adjusted serve and recent aptitude to come to net have been reaping its rewards on grass and while she’s never had much success at the All England Club, I think she’s primed for a deep run.